Last week I attended Conflux 9, the 52nd Australian National Science Fiction convention in Canberra. It’s fair to say like Worldcon in 2010, this convention exceeded my expectations. I attended a number of workshops, each one engaging and highly worthwhile. I listened to panels, interacted in kaffeeklatsches and pitched 2 novels! 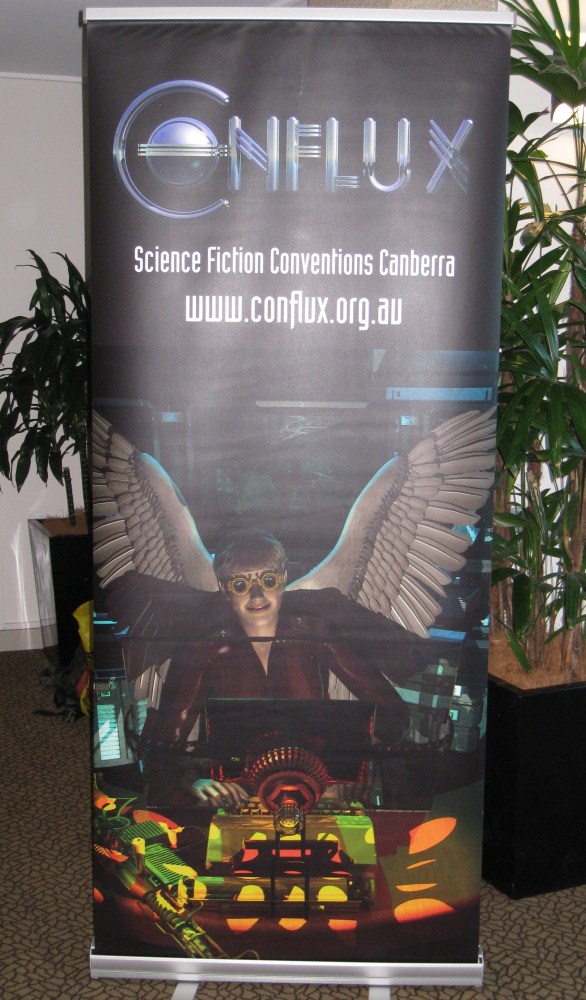 The thing with a good convention is they often end up offering so much more than the listed activities schedule suggests. From go Conflux 9 was something special. The breadth of members, the final count ran somewhere between 250 to 300 enlightened souls, offered so much to a writer like myself. I have listed out the very best bits and pieces I experienced in chronological order. Missing from this diarised reflection are the countless conversations with so many people from fans to cover artists, editors, authors you name it.

Up at 5 am, uneventful flight from Melbourne to Canberra and a quick taxi ride to the Rydges Capital Hill hotel. Impressed to discover at 11:30 my room was ready. Quick unpack and rushed to the midday 3 hour workshop, ‘Writing with the five senses’ by Dr Gillian Pollack. We smelt, touched and listened to all manner of things and tried to transpose those sensations into words. Very cool. Gillian is a fantastic teacher and left me slightly high due to the strong aromas.

A few panels during the late afternoon, one on ‘Elevator Pitches’ proved especially relevant as I had two, five minute pitch sessions booked for the following day – eek! Wandered down to the local shops and ate dinner then rushed back for the kickoff event followed by a fun cocktail party. The official MC was Craig Cormick, our Evil Overlord during the opening ceremony which ended up being hilarious and highly entertaining. 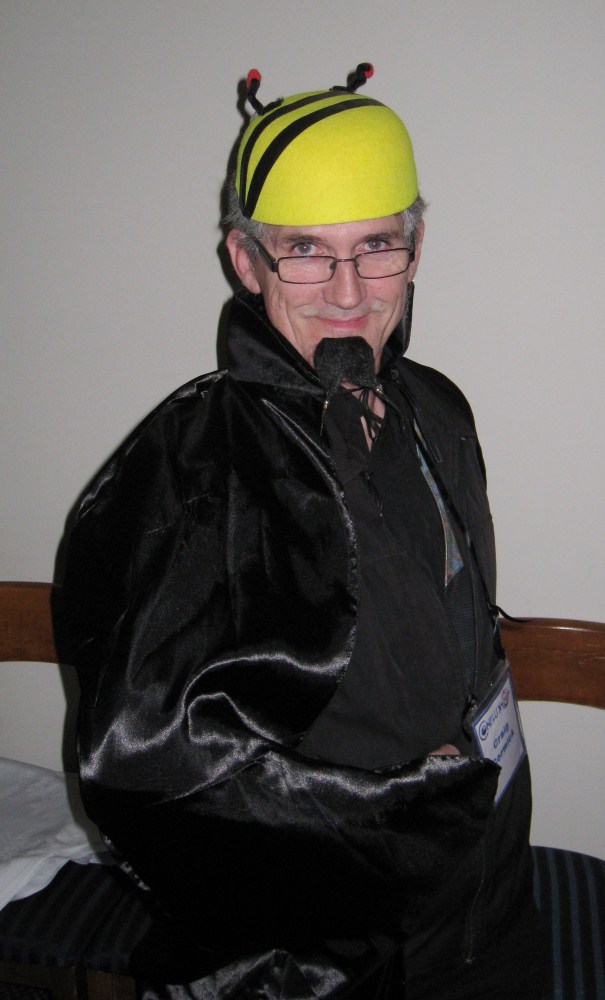 During the drinks and nibbles I met so many wonderful people. Ended up talking in depth to Chris Andrews about a great many things only touching on writing for the briefest moment.

Up early again, breakfast and straight into an 8 am workshop – Distilling your story by Chris Andrews. He knows a heck of a lot about structure and how to get down to the knitty gritty elements that form the core structure of any story. Again very much worthwhile.

I had been allocated a 5 minute slot with Tara Wynne a highly experienced and respected Agent of Curtis Brown. Like the others waiting in the small foyer, I felt quite nervous as I waited to pitch ‘Impatience’ for the first time ever, to an industry leading professional. Tara is lovely, down to earth and the time flew by. She asked for a few chapters and suddenly I stood on the other side of the door with a huge grin. Mission accomplished!

Lunchtime and it was away with Duncan to the Dymocks at Tuggeranong shopping centre. Duncan weaved his magic selling his latest book ‘Valley of Shields’, number 2 in his Empire of Bones series. I always enjoy doing this with Duncan.

All too soon it was time to head back to the hotel as Duncan had a reading at 3:30. 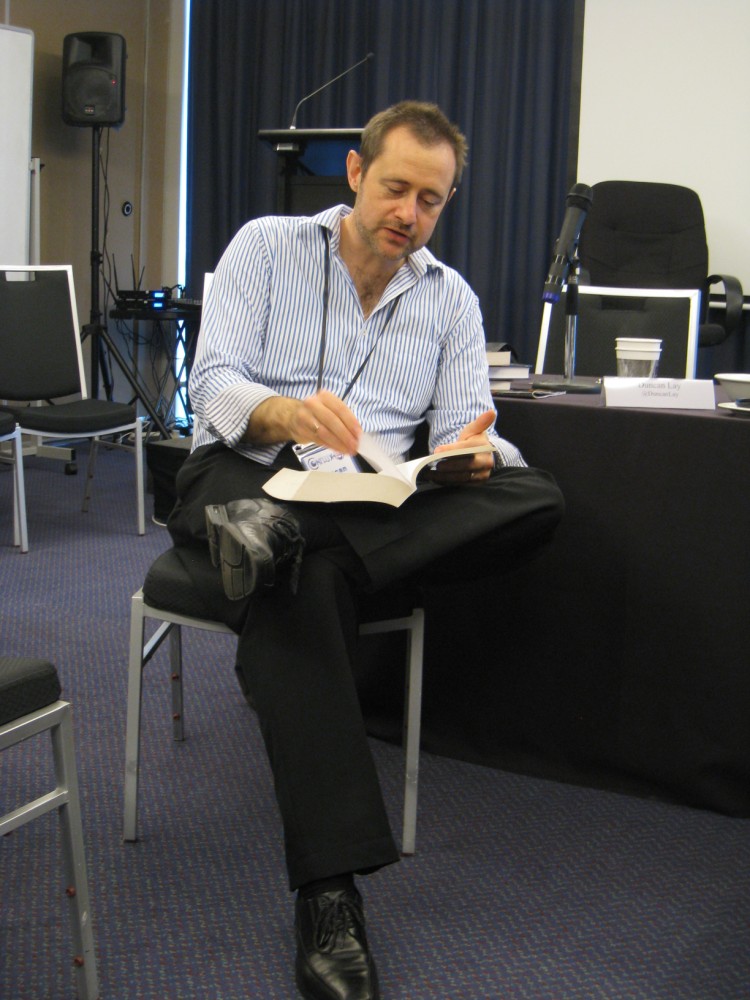 I also wanted to attend a reading from ‘In Fabula Divino’ by its creator Nicole Murphy. The book is an anthology, excellent collection of short stories however the reading was the same time as Duncan’s. Again and again this happened during the con and I had to make hard decisions. Such is life.

I felt more comfortable with this second 5 minute pitch. Rochelle Fernandez, Commissioning Editor for Harper Collins proved to be like Tara, gracious and professional. I pitched Flight, my latest manuscript, entering the room with a strange air of confidence. Again the 5 minutes flew by and as it turned out, Rochelle also asked for it. Two home runs, speechless!

In the early evening I attended the ‘Next’ anthology book launch. A great atmosphere with two short readings, drinks and nibbles. Many of the authors lined up in a long row happy to sign a copy. I’ve never seen anything like it. Lovely to meet everyone as again the half hour flew by in a whir of pens, wine and quick chats here and there. 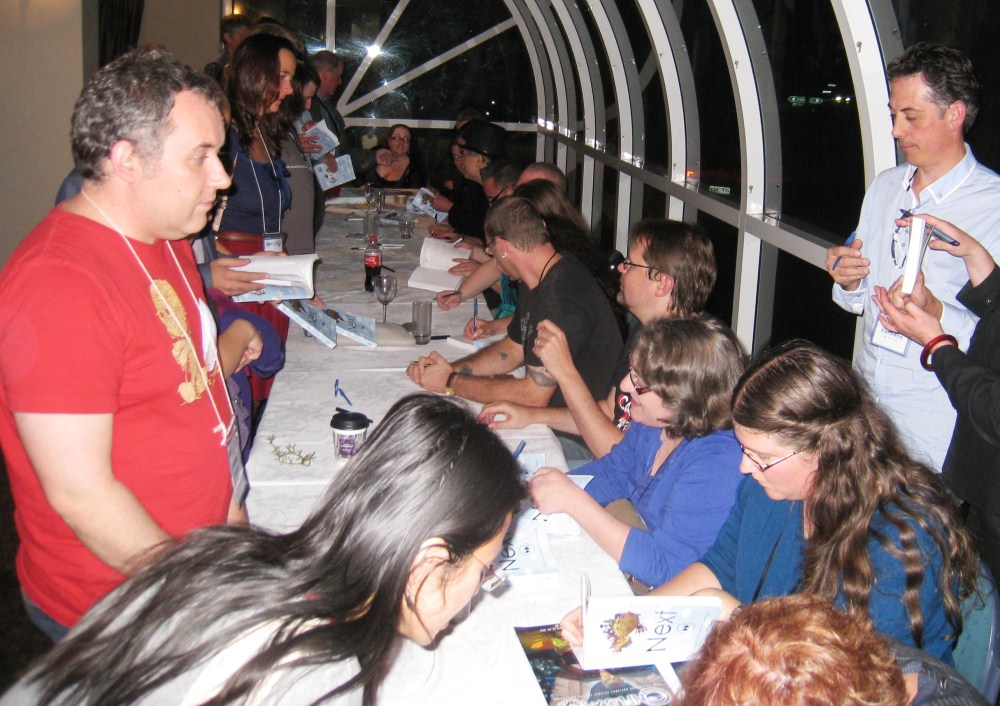 I also grabbed a quick shot with Rob Porteous. The costumes across the con were amazing from Steampunk to Period attire. I witnessed a dazzling array of finery and kick myself now for not grabbing more photos. 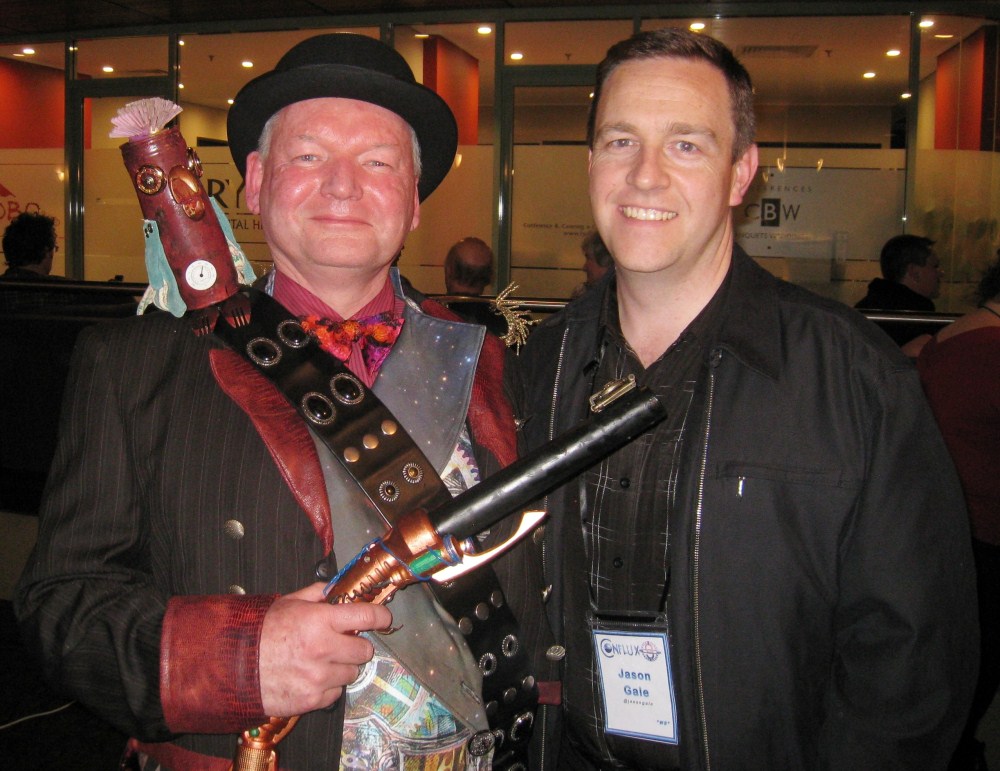 Friday night was out with the boys, Chris and friends Marc and Luke Mercieca who were also attending the con. We drove for a while, don’t ask me where we went, for one I’m a Melbourne boy and two I was on a high from two successful pitches and a glass of wine. We eventually found an excellent Indian restaurant and settled in for a delicious and varied meal while talking television shows, movies and all manner of things. Back to the hotel for some well needed shuteye.

Up early, well out of bed at least, by now especially in the mornings I was really starting to wane. Breakfast before an 8 am workshop once more this time by Anthony Eaton ‘Getting real with Worldbuilding and Characters’ which turned out to be mostly about identifying core story structure. Tony presented in some ways a similar workshop to Chris’ the morning prior however with a different slant on the story structure approach. Fascinating stuff.

I flittered from one room to another, ending up watching a panel on the Ethics of Immortality. Many opinions across the topic and fascinating to hear what people had to say. Followed the panel with Duncan’s Kaffeeklatsch with the guys and one or two others. 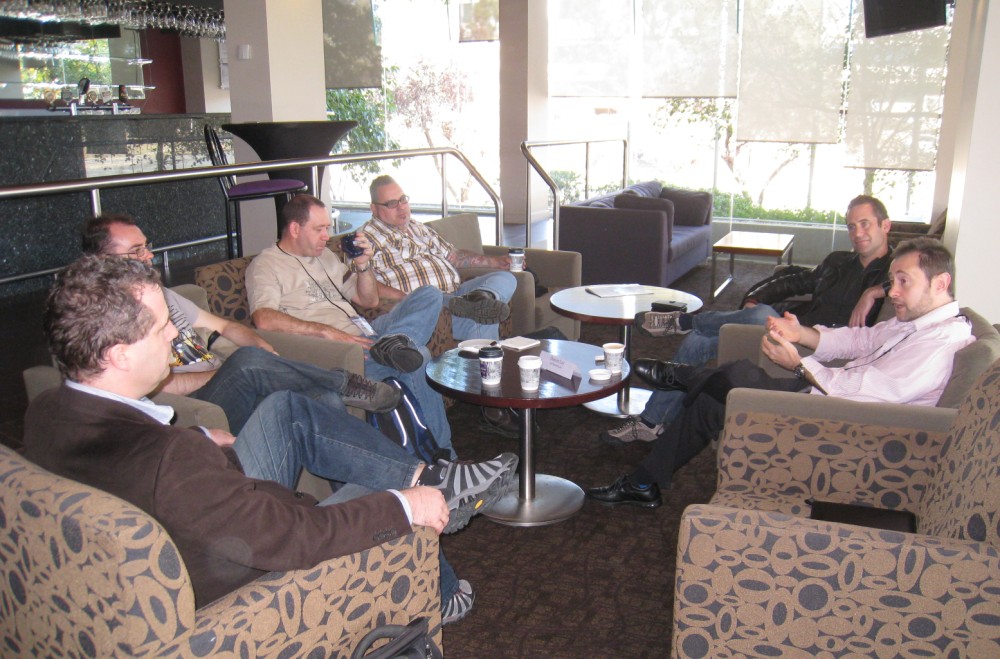 The topics ranged from how he got started to the instore appearances he does. Session over, we headed out to another Dymocks, this time at Belconnen.

More books sold then back to the hotel. Duncan had a panel to attend and I a second Kaffeeklatsch, this time with the gracious Kate Forsyth. Kate is an extremely talented story teller. She has a PHD in awesome, well not really, in reality she is studying for a doctorate in fairytales and really knows her stuff. Kate has been writing since she was 7 and is a bestseller across numerous novels. 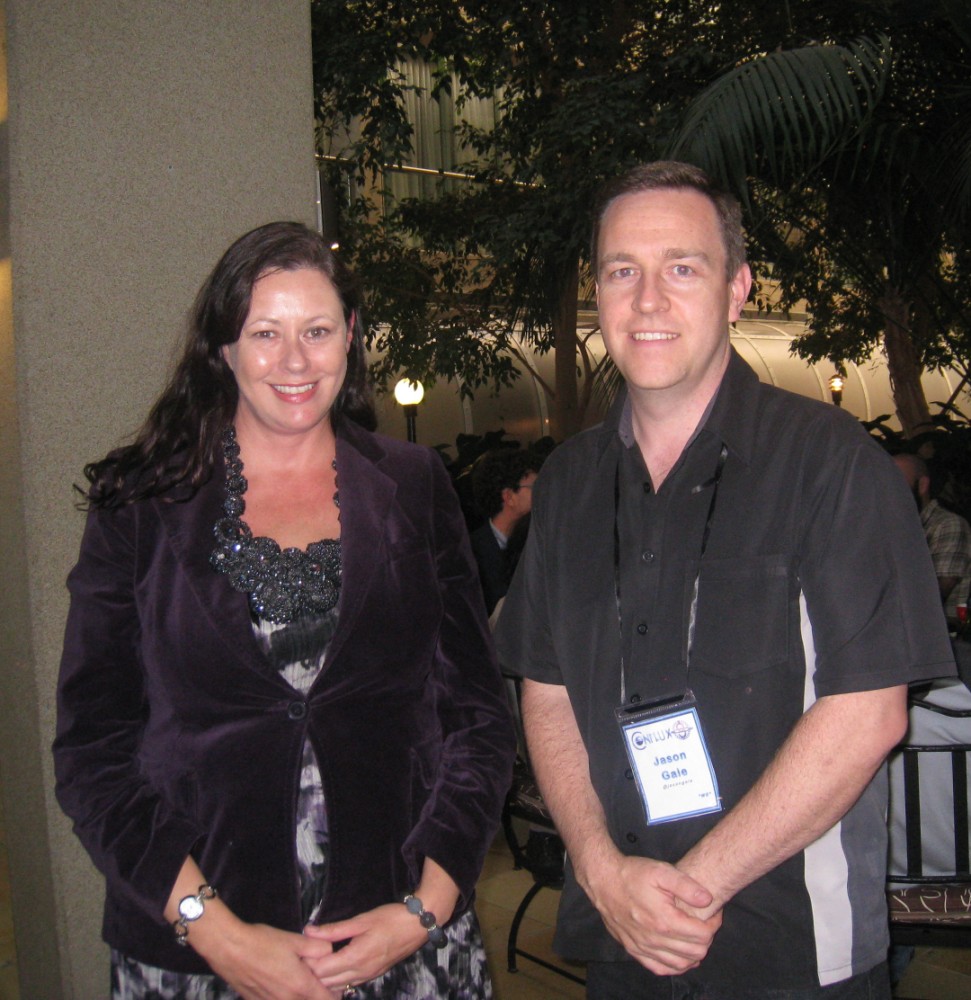 The group discussed everything from 50 Shades of Grey to Matthew Reilly’s writing and of course Kate’s many works. The photo was just after the session. I felt privileged to have met her and made the most of the opportunity to fire away as many questions as I could. Very cool.

I stuck my head in for about 15 minutes at the Ditmar Awards. Again, cannot be in two places at the same time. I was insanely hungry having only grabbed a quick bite at the shopping centre. Duncan, Chris and I wandered the streets of Manuka eventually ending up at a Bakery for a pie and drink.

Before long it was back to the hotel for Duncan and Katie Taylor’s joint book launch session. Purchased both books and Katie’s previous first book of her series.

Duncan had to depart after the launch and I moved on to the Star Wars panel. What a hoot! Some great minds in the room spilled forth the most outrageous suggestions. A lot of fun and a great way to unwind after a long day.

A large group descended on the bar whilst the Disco was underway – kudos to Sean Williams for an amazing mix of dance tracks. After days of intense learning and rushing about it was really nice to have some downtime accompanied by a few easy drinks. I think we called it a night around 2 am. I heard talk of an in-room party yet simply had nothing left to give. Fell into bed, exhausted, tipsy and yet so very happy having spent such an amazing day with the most wonderful people.

No workshop – sleep in – yay! Had a very lazy start to the day. To be honest I doubt I would have made another 8 am workshop. I made it half awake to the excellent 10 am panel – ‘Does a cover sell a book’. I had never really stopped and thought about the impact different covers have and the work that goes into a successful one. Very interesting. By 11 am my brain, after downing 2 cups of coffee, was finally awake and I enjoyed a reading by Kate from her ‘The Wild Girl’ novel. In fact I liked it so much I bought a signed copy.

I felt panelled out by lunchtime. Chris had graciously offered a lift to the airport and I decided to chat to a few people I had missed over the days before heading off. That’s the thing with a convention, the time goes so insanely fast as you’re always rushing from one thing to another. It’s a good rush, it has purpose – exposure to as much writing relevant content as possible and yet after 3 days I felt full. Pleasantly so.

Enjoyed a wonderful conversation with Zena Shapter about finding your voice. Said hasty goodbyes to at least a dozen faces and then in the car. Arrived at the airport to the stark contrast of a subdued flight lounge. A safe trip home then reunited with my family. Yay.

In summary Conflux 9 was very cool. I can’t give a big enough compliment to the co-chairs Donna Hanson and Nicole Murphy plus all the interesting members I got to meet. Wow, and I didn’t even mention the international guests…

Check out my haul:

Thanks to everyone I met, you made my convention so memorable.

In the words of the famous, one time Governor of California… I’ll be back


This entry was posted in Uncategorized. Bookmark the permalink.